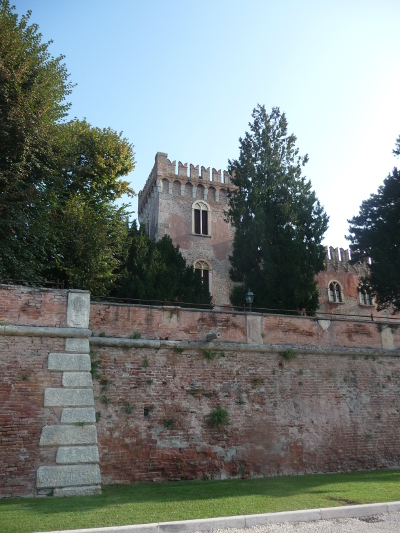 Bevilacqua is 52 km southeast of Verona, on the SR 10, right next to the border with the province of Padova on the other side from which it is divided by the river Fratta, which marks the border for a substantial stretch of its course,. Both Bevilacqua and its fraction Marega lie on a strip of land, approximately 5 km long and 2 km wide. The town, with its surface of 12.12 km², is located at an average altitude of 14 m above sea level. There is a train station of the line Padova – Legnago – Mantova. It borders with the Comuni of Boschi Sant’Anna, Terrazzo, Minerbe, Montagnana and Urbana (these two under the province of Padova).

The emblem of Bevilacqua recalls the events that shaped the history of the town. It pictures two fundamental elements: the wing and the castle; the former is a reminder of the origins of the Bevilacqua family (The town of Ala, “wing” in Italian), the latter a symbol of the supremacy exerted on the land by the noble family which gave the town its name.

In ancient times the river Adige flowed through the town of Bevilacqua. It also crossed the Comuni of Montagnana, Casale di Scodosia and Saletto (province of Padova). It had not yet been safely embanked as it is today, hence the frequent devastating overflows, which ravaged the surrounding area, hindering a progressive social and economical development.

During the domination of the Scaligeri, before 1336, Guglielmo Bevilacqua, lieutenant in Padova of Cangrande della Scala, as a reward for the service provided to the Scaligeri, was granted a permit to build a majestic and imposing castle to oppose the incursions of Padovan troops on the territories under the dominance of Della Scala. The fortress is still there nowadays and it is known as the Castle of Bevilacqua, bearing the name of its owners. It rises on the western bank of the River Rabiosa, today known as Fratta, that defines the border between the provinces of Verona and Padova. The construction project was carried out by Guglielmo’s son, Francesco, who on 16 December 1336, by decree of Alberto and Mastino Scaligeri, was awarded full jurisdiction on the castle and the surrounding lands, a tax exempt and the permissions to hunt and fish. Since then, the events of the town were indissolubly tied with the Bevilacqua family and their imposing manor, even during the second world war, when it was occupied as an operative joint by the German army. Bevilacqua is also known for the Pieve (a parish from the early Middle Ages) of San Pietro in Tillida, built in the early 1000s and a landmark for the inhabitants of the several surrounding villages. It exerted its influence over an area that extended from Begosso, a fraction of Terrazzo on the river Adige, to the town of Bonavigo. The Pieve lost its influence over the following centuries and was forgotten for a long time, to the point of risking demolition in the early 1900s. It was saved by the historian Fiocco and was recently restored to its former glory, along with its splendid frescos. 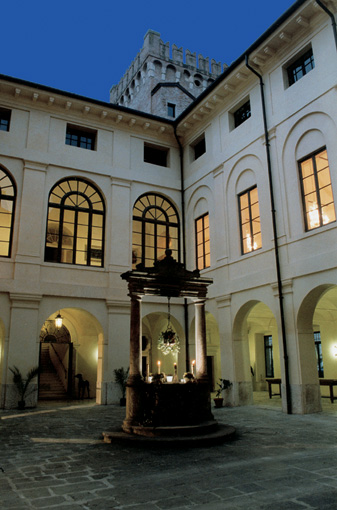 A location worth visiting is the Castle dated 1336, skilfully restored in the 1990s, constitutes a valuable example of how fortified buildings used to appear in the province of Verona in the 1300s.

Opposite the majestic castle, next to the banks of the river Fratta, there is Villa Bevilacqua. It once served as a summer residence of the Bevilacqua family. The elegant villa develops symmetrically and the brickwork façade displays five windows on each floor. The piano nobile (first floor) can be accessed from the outside by a balustrade stair, which leads to the enormous garden in front of the villa, adorned by elegant fountains. In the proximity of the castle there is the ancient postal station dated 1400. It was a tavern with the purpose of accommodating travellers and changing their horses. The front of the building displays six great archways and six vaulted windows. Two large looming chimneys arise from the roof. On each side there is an archway that leads into the portico of the building. On the east-facing side of the building there lie the remains of an ancient sundial. Other observable significant elements are the wooden ceilings, an exquisite hearth and the ruins of some castellated walls in the back. It is also worth visiting Palazzo Bevilacqua (dated 1700, not to be confused with the villa), placed at the heart of the town and nowadays used as town hall; the romanic bell tower of the parish of Sant’Antonio Abate and the pieve of San Pietro Tillida, widely known as the “Chiesetta di San Pierin”, which real name is due to the several linden trees in the area (in Italian tiglio). Worth seeing is the altarpiece and the Madonna Lignea, respectively dated 1500 and 1400, both displayed by the parish of San Antonio Abate, while in località Fittanza, between Marega and Bevilacqua, can be admired some frescos recently credited to Battista del Moro.

Agriculture is the prevailing activity, especially in the fraction of Marega, once known as the international market of the green beans. It was so well renowned that a market dedicated to vegetables was held every Sunday. Both fruit and vegetables are farmed (apples, pears, green beans and radicchio) A big company producing air-conditioners plays an important role for the economy of the town, around which a lively industrial area has developed. Small activities developed in the wood and the textile sector as well.