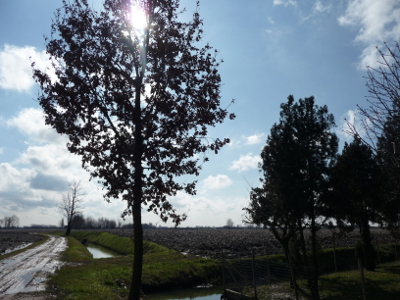 Angiari is 37 km away from Verona and 4 km from Legnago. The river Bussè flows through its territory. It is one of the smallest towns of the Veronese Valley and only Concamarise is smaller. The eastern area of the town is placed on the Adige’s riverside, while the western is constituted of several fractions such as Cason, Engazzà, Boschirolla, Ronchi, Motta. It borders the Comuni of Cerea, San Pietro di Morubio, Roverchiara, Legnago.

The town’s name can be easily explained. It most certainly originates from the Latin word: “glarea”, which means gravel. In 932 it is referenced as “Castrum Anglareii” and later on as “Castrum Anglarei”, then “Anglarei” and “Anglari”. The historical evidence that confirms this theory comes from the former harbour on the Adige that host commercial boats coming to trade the gravel harvested from the river bed and used as building material. The port interested the populace of Angiari and nearby towns such as Cerea and San Pietro di Morubio.

The name of Angiari, was first chronicled in 932 and again in 995, when countess Ermengilda, member of the most important family of the time, gave her land property to the Canonici of Verona as a gift along with her castles, houses and the church. This cession was recorded by several documents, such as one of 1137 written by Lottario.

During that age the “Vicina” rose, an association of household leaders which ruled over the town with the approval of the Captain of Verona. Always in those years, the plains around Angiari were covered in woods and swamps, which required constant work of reclaiming that lasted until the thirteenth century and provided some fertile lands. That is when powerful families settled in the town, becoming great landowners. One century later Angiari became a religious landmark, known as pieve, with the parish of San Michele Arcangelo and the churches of San Giacomo and of Santa Maria della Croce (inhabited by a Franciscan hermit). The town’s land was plundered in 1232 by Azzo Novello and again 1438 during a clash between Visconti, Carraresi and Veneziani.

The fate of Angiari followed the historical happenings of the nearby Legnago, especially in 1513 when the Captain of Venezia ordered the razing of the fortress. In 1630 the town was scourged by the plague and the two statues portraying San Rocco have been worshipped ever since those hard times, they can now be admired in the church and in the parish.

During the Napoleonic Era, in 1979 Angiari became the setting for one of the several battles between French and Austrians. In 1866, after the Third Italian War of Independence, Angiari is annexed to the Kingdom of Italy.

In 1882 there was a breach of the Adige’s riverbanks and its waters flooded the town, jeopardising its economy to the point that its inhabitants were forced to emigrate towards America. 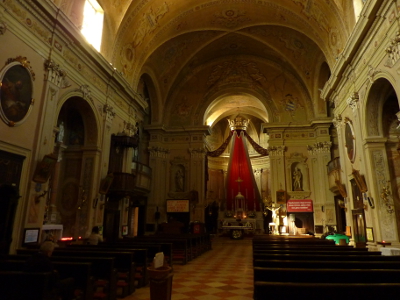 The original structure of the Oratorio della Santa Croce dates back to the late fifteenth century, and was restored in the 1600s. Palazzo Lando Moromovo was instead built in the seventeenth century. The Church of San Michele Arcangelo was once demolished due to water seepages in its walls and then built again in a neoclassical fashion in the 1700s. Inside it, there is a wooden statue of the 1500s, a painting by G.B. Rossi, an artist of the 1600s known as Gobbino and an altarpiece by the Venetian painter Antonio Pellegrini, which dates back to the early 1700s. In the town centre and the surrounding fields there are some noble buildings and agricultural compounds worthy of interest such as: Villa Soave, built in the 1600s and widely refurbished, its architecture mixes Neoclassical, Baroque and Liberty, Villa Grella-Noris with its frescos and paintings, Villa Sparavieri alla Boscarolla, a characteristic country house. There are also: Corte Avrese alla Paina, property of Fantoni, Corte Parma-Lavezzola, Corte Vidali today property of Bissoli-Gastaldi, Corte Lando-Murnovo Soave, Corte al Casone-Torresani and Corte Becelli-Lanza alla Palesella.

The main economical asset of Angiari is certainly agricultural, with its farms focussing on corn, tobacco, grains, apples, pears, peaches, strawberries and melons. Moreover, due to the several floods there is plenty of the sandy terrain most suitable for high quality asparagus farming. Also thriving are the craftsmanship, trading and the several different kind of companies.