Bonavigo is 35 km south-east of Verona, on the left bank of the river Adige. Its surface is of 17.79 km² and its fractions are Orti and Pilastro. Its territory suffered several modifications because of the several floods and the changes of the Adige’s flow. In Bonavigo, fed by large water pumps, the minor river “Terrazzo” originates; it brings water to the surrounding farmlands. It borders the Comuni of Roverchiara, Albaredo d’Adige, Veronella, Minerbe and Legnago.

Probably of Roman origins, the burg’s name is recorded in documents form 953 and 1041 with the name of Longbardic derivation Vicus Bonadi Cus, referencing the place where the Adige forks. One of its minor ramifications is called “Fossa Chirola” and is responsible for the serious flood known as “Breach at Cucca”.  The town’s name’s origins are still uncertain and some believe that it comes from the Longobardic name Botanucu Boto.

Bonavigo’s origins are very ancient and there are documents dated 887 chronicling that the land was at that time inhabited. Furthermore, tombs and gravestones discovered on the territory confirm the presence of a former Roman settlement. The Barbaric invasions and the intense floods of the river Adige repeatedly interfered with the life of the inhabitants of this rural area, especially throughout the middle ages. Only after the river flow was finally arranged, stabilised, rerouted and canalised by the Benedictine friars, the territory acquired its contemporary setting. As part of the Holy Roman Empire, Bonavigo as well became object of concessions from several Emperors to their trusted bishops, monasteries and vassals. Around the 1000s, two castles were built in today’s town square. Around Ciusara was built the Camaldolese Church of San Michele of Murano. In 1145, Pope Eugenio III granted to “Curtem Bonadigui”, Corte Bonavigo, permission to build a Church and collect tithes. At the time of the Scaligeri, the town constituted an independent Deanery, it was then conquered by Ezzelino da Romano, and it became part of Angiari under the Serenissima Repubblica di Venezia, constrained to a marginal role in the historical events that involved the nearby towns. In 1894 was built a metal bridge on river Adige, to connect Bonavigo and Roverchiaretta, becoming a military objective during the Second World War. Later destroyed, as every other building on the riverbanks, it was built again in 1961 with five arches in reinforced concrete, allowing the village to quit an inconvenient isolation. The new parish, which substituted the old church destroyed by the bombings, was opened in 1956. 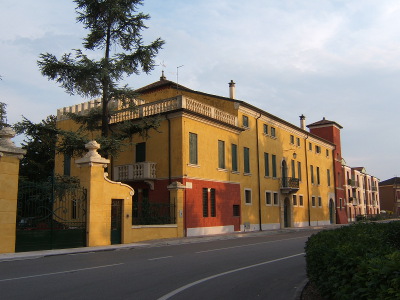 Around Ciusara there is the church of Santa Maria. The original structure dates back to year 1000, built by the Camaldolese monks of San Michele of Murano, with its lateral apsides frescoed and adorned during the 1100s, along them a portrayal of Christ without a beard. Even though most of its art was stolen by the Napoleonic troops, there is still a triptych of 1476, by some Bernardo or Leonardo from Vereona, depicting the “Virgin on the throne, San giovanni Battista and a bishop”, now substituted with a reproduction. There is Villa Brenzoni, built upon the old structure of a fortified castle, dated back to the age of Ezzelino da Romano and connected by an underground passage to Villa Morando de Rizzoni, today demolished. There is also the smallest sanctuary of the Veronese territory, fourteenth-century church of San Tomaso, solitary on the left bank of river Adige, facing the waters. Inside it, there is a splendid altarpiece depicting the “Beata Vergine con Bambino” and several ancient tablets left there as votive offerings. Inside the parish of Bonavigo there is a painting of the “Natività di San Giovanni Battista” credited to Francesco Montemezzano and a “Madonna del Rosario” whose author is unknown. The sixteenth-century Villa Bernardina, built in a classical style in the district of Bernardine, with its balcony later adorned by baroque decorations in wrought iron.

Around Pilastro there is the late Renaissance compound of Villa Buri, accessed through a baroque portal. In Bosco, on the banks of the river Adige, there is shrine of the 1500s with a depiction of the “Madonna delle Grazie”. In the district of Orti there is a noteworthy altarpiece of 1575, signed by “Surdis Opus” and placed upon the main altar of the parish of Sant’Andrea, entirely rebuilt in neo-romanesque fashion. And always in Orti there is Villa Fantoni, another historical palace, property of the monastery of Santa Caterina di Venezia from the 1685 to the early 1800s.

Bonavigo’s economy is mainly founded upon agriculture. Strawberries, melons and vegetables are grown in greenhouses and their farming is quite relevant, like the production of apples, pears, corn, sunflower, soy and wheat. There are also cow and chicken farms. Several industries and craftsmanship businesses have recently spawned in Bonavigo, stimulating the growth of the local economy.